The slides from my review talk on numerical simulations of binary neutron star mergers can now be found online here. The talk is part of the PSI2 workshop on “Gamma-Ray Bursts and Supernovae”. 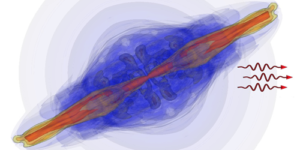 Our recent article on the interpretation of the afterglow of GRB 170817A published on PRL has been featured on Physics by the American Physical Society.

Today the LIGO and Virgo collaboration announced the first detection of gravitational waves from binary neutron star mergers (GW170817). This was exciting already, but even more exciting was the announcement of the detection of several electromagnetic counterparts, from gamma to radio, and in particular the clear association with a short gamma-ray burst. We finally know what causes short GRBs!

Here you can watch a video from a simulation of a binary neutron star merger by me and my collaborators and that was also featured on Nature in an article describing this new exciting discovery.

The Fate of Merging Neutron Stars One of my latest articles (Piro, Giacomazzo, Perna 2017) has been recently featured by the American Astronomical Society on AASNova. The full article can be accessed for free here.

Talk at INT in Seattle available on line

On July 31 I gave a talk at the INT workshop “Observational Signatures of r-process Nucleosynthesis in Neutron Star Mergers” on “Magnetic Field Effects in the Post-Merger Phase of Binary Neutron Stars”. The slides of my talk are available online in pdf format together with the other workshop talks.

Plenary talk at the EPS Conference on Plasma Physics

Two weeks ago I gave a plenary talk on “General Relativistic MagnetoHydroDynamic Simulations: a Review and Status Report” at the European Physical Society 44th Conference on Plasma Physics (Belfast, Northern Ireland). The pdf version of my talk is now available online.

Two weeks ago I gave a review talk on “Merging Neutron Stars as Tools for Fundamental Physics” at the S13 session on “The multi­frequency gravitational wave universe” at the European Week of Astronomy and Space Science (June 26 – 30 2017, Prague, Czech Republic). The slides of my talk can be found here in pdf format.

I just announced a new postdoc position that opened recently in my group. The deadline is on March 5. More details can be found on my job page or on hyperspace.

My latest APS talk is now available on line

My latest talk at the “April” meeting of the American Physical Society that was held in Washington DC from January 28 to 31 2017 is now available on line on the conference web page. In this talk I presented a short overview of the most important results of our latest paper on “General relativistic magnetohydrodynamic simulations of binary neutron star mergers forming a long-lived neutron star“.

That session included also other interesting talks about neutron star simulations and magnetic fields, and many of those talks can also be downloaded from the APS April meeting web page.

All the seminars given on December 13 2016 at the “workshop on Numerical Relativity in matter spacetimes for Gravitational Wave astronomy (NRmGW)” in Valencia (Spain) are now available on YouTube. Below you can watch my talk on “Magnetic Field Effects in Neutron Star Binaries”.