Gravitational-wave signals, initial data, and movies can be found as supplemental material in the papers of my group:

Riccardo Ciolfi has also collected our gravitational wave signals in a bitbucket repository.

Below you can also find older data from a simulation performed when I was at JILA (Boulder, CO, USA).

by Bruno Giacomazzo and Rosalba Perna

Abstract: By performing fully general relativistic magnetohydrodynamic simulations of binary neutron star mergers, we investigate the possibility that the end result of the merger is a stable magnetar. In particular, we show that, for a binary composed of two equal-mass neutron stars (NSs) of gravitational mass M ~ 1.2 M ⊙ and equation of state similar to Shen et al. at high densities, the merger product is a stable NS. Such NS is found to be differentially rotating and ultraspinning with spin parameter J/M2 ~ 0.86, where J is its total angular momentum, and it is surrounded by a disk of ≈0.1 M ⊙. While in our global simulations the magnetic field is amplified by about two orders of magnitude, local simulations have shown that hydrodynamic instabilities and the onset of the magnetorotational instability could further increase the magnetic field strength up to magnetar levels. This leads to the interesting possibility that, for some NS mergers, a stable and magnetized NS surrounded by an accretion disk could be formed. We discuss the impact of these new results for the emission of electromagnetic counterparts of gravitational wave signals and for the central engine of short gamma-ray bursts.

Data include gravitational wave signals for models B0 and B12 (both Zerilli waveforms that were used for figure 4 in the letter and psi4). 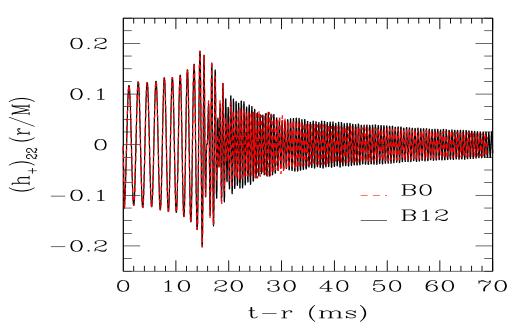